The cake was amazing! 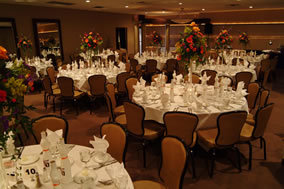 My husband and I were married and had our wedding reception at Todaro's on June 19th, 2010. I will say the event person there Bradley Plaster, is good at answering any question you may have until he has your money. Once you pay a $500 deposit to hold your date, it's hit and miss. There's always an excuse. Either he's out of the office with an emergency (which happened about 5 times that I called) or he was with another client. It was almost as if he was avoiding us. Then he'd contact us back several days later. Then once he got the remaining balance 2 weeks prior to our event, any questions we had were ignored. He wouldn't respond to emails, or phone calls there are reeasons why: 1- When my husband and I sat down with Brad to plan our menu, we agrred upon Chicken Marsala and Filet Mignon with red skin potatos and carrot and green bean jubillee. Well, there were no carrots (this is minor compared to what else happened) 2- We also agreed during cocktail hour that they would pass stuffed mushrooms, italian meatballs, and crabcakes around. Also there would be a fruit tier with pina colada dip. Not only did we not have the dip, we also didn't have the meatballs or the crabcakes all of which had been paid for (We have proof of such on our invoice) 3- Chair covers: we were to meet with Brad to discuss the colors of our linens and such. He NEVER told us they were extra. He told us it was part of the price that we had already paid. So when he told me it was extra, he then said that we could have white table clothes as well as chair covers. When I asked him if he was sure of this he said "Yes sir" FOUR times on the phone. Well the night of our reception, there were no chair covers. When I asked the lady about this, she said that there were to be no chair covers in the planning. Which was also a lie. When we brought this up to Mr. Plaster, he said that the dip was a mistake and the meatballs, crabcakes, and chair covers were not included in our price. Well when I told him that it was and I faxed him a copy of my invoice, he emailed me the same exact invoice BUT he deleted the meatballs, crabcakes, and chair covers to make it look like they weren't part of what was paid for. Then what does he offer us? $50! Um, for all that it clearly showed we paid $578 for all of them and he wanted to give us $50? So basically, DO NOT plan any of your events at Todaro's as they will scam you out of your money. They will tell you your'e getting one thing when you're not and when you confront them about it, to cover their ass, they will make up an entire new invoice so that they can call it "legal" Your wedding reception is supposed to be "the perfect day" and this is what I was promised. We shouldn't have to worry about things going wrong and what else might go wrong. And when you contact them to confront it, they should be aware that the customer is always right and not tell me I'm wrong and get mean and nasty with me on the phone. So again, I would say not to have your event of any kind at this facility. It's an awful place to do business with.