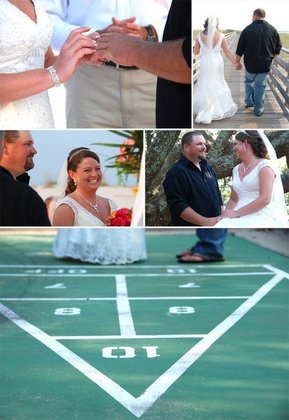 Our Wedding was absolutely beautiful! Getting married in Orange Beach, AL was absolutely perfect for us! We loved it! The ceremony was perfect, and the location was perfect at Florida Point Beach...It was amazing. 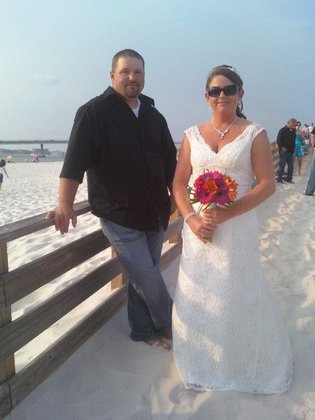 Sheila at Orange Beach Weddings is fantastic! I highly reccommend her. She really went above and beyond for us. She is definitely worth her weight in gold. 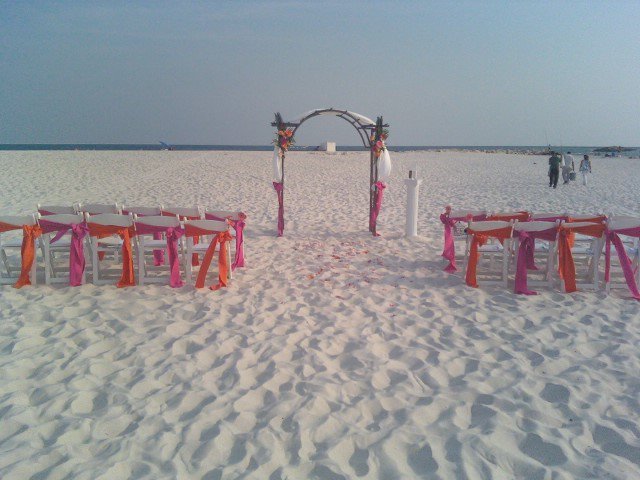 Gorgeous! This was the perfect place to hold our wedding. It wasn't all that crowded, and it was fourth of July weekend. It was away from the condos, which made it more private. It was perfect!

Terrible is the only thing I can say...We held our reception at Shipp's Harbour Grille. They messed absolutely EVERYTHING up....Thank God, no one knew it but us. First, when my stepmother and I met with the owner in October 2010, the year of the oil spill, we were assured that we could have the complete rooftop deck for our reception for 25 people or less. After asking if we needed a contract, we were assured that we did not, and that everything would be fine. My parents paid a $250 deposit, which was to be about half of the total payment to hold the date and deck for my July 3 wedding. During the months leading up to the wedding, several attempts were made to contact the owner, who never answered her phone or her emails. Fast forward to July 2011. Apparently the promises made in the year of the oil spill have been forgotten with the resurgence of tourism in the area this year. THREE DAYS BEFORE MY WEDDING, the owner called me for a final headcount. After telling her 25, she rudely told me that I couldn't have the entire deck for that small of a party, and that she had been assured 30-40 people. I calmly explained that our party had never been that large, but she insisted that it had and I would have to be satisfied with half the deck. Additionally, she upped the price she had quoted my stepmother and I in October, and added a fee for serving tea. She also told me that I could bring my decorations and her staff would have it set up for the wedding. The day of the wedding came, and my parents took our decorations to the restaurant only to find that the staff had NO IDEA we were even coming that day. Really? What kind of owner doesn't prepare her staff for a wedding reception? We arrived that night to find that our decorations hadn't been set up as promised. My poor Maid of Honor, my stepmother, and my wedding planner had to set everything up themselves, which was not what my planner had been paid for. She went above and beyond. Additionally, everyone was served unsweetened tea, in which there was basically no ice by the time we arrived. We live in the South and expect to be able to choose between sweetened and unsweetened ice tea. My new husband and myself were not served or waited on first. We had to wait until last in each course to be waited on and served. The servers admitted they had never handled a wedding reception before, when we were assured by the owner in October that they did it all the time. One of our guests had to wait 20 minutes to receive his entree when everyone else had finished eating. The food was good, with the exception of the terrible green beans, but it was not worth the hassle. The brand new weekend manager did apologize to me, but nothing was done or offered to reconcile the situation. We were definitely overcharged and underserved. Thankfully, our guests didn't notice what a disaster the night was.
Also, come to find out, the real reason that we were not able to have the entire deck was because the owner had double booked my reception and an engagement party. I had to watch a guy propose to his now fiance during my wedding reception. I know that they were disappointed to have their thunder stolen as much as I was.
Thanks Shipps Harbour Grill for destroying what was supposed to be a perfect day. I will never eat at this establishment nor their other establishment again because of how I was treated. I've received better treatment at Burger King.