April is absolutely wonderful! We had the pleasure of meeting her and Amanda and Robbie (during our engagement photo-shoot). April and Amanda were our photographers during our wedding. They got to know us during our engagement photoshoots.
We were looking into a few different photographers before we decided, and it was April's great attitude and enthusiasm that we really loved. Her and Amanda actually enjoy what they do and so during all the photography sessions we have done with them, we have so much fun and it is very easy to become comfortable and have "real" smiles because we are laughing so much. It was actually harder to have a serious face.
What we really appreciated about their approach is that they work to capture YOUR moment and enhance THAT, and not JUST make them. We had found a bunch of other photographers that ONLY worked to create moments for us, instead of just letting them happen and being there to capture it.
We have gotten many compliments on the results of our pictures (and this is from people who do not compliment easily).
We still have one more shoot to do with them - our Day After photoshoot and we are both really excited for it. My mom's advice to us was that if we needed to cut corners on our wedding, DON'T do it with the photography. She told us these are your lasting memories. This is a bit of advice I am happy to pass along, and we definitely would recommend April to anyone looking for a great photographer. 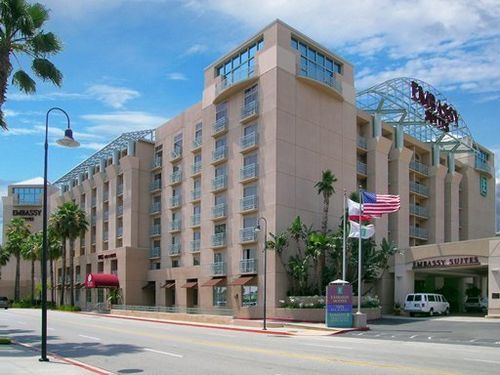 This is a lovely hotel with a great location. The rooms were clean and spacious and the atrium was beautiful. We were approximately 2 miles from the ceremony site and next door to the mall. The location was perfect for our guests. We did not have to worry about how to entertain our guests because they were so centrally located and had the mall right next to us. The offered a free shuttle service to the ceremony site, and had complimentary breakfast AND complimentary cocktail hour in the evening. Our guests most especially enjoyed the hor'dearves and wine. The manager (Angel) was VERY helpful. She kept me updated on the rooms being booked by our guests and opened up more rooms as our allocation of rooms kept getting booked up.

Our guests absolutley enjoyed the food. The staff was very diligent about keeping the trays filled. We really appreciated that they had set out some food for us, since sometimes its the Bride and Groom that get overlooked as everyone enjoys themselves. We did not get a single complaint other than that some of our guests wished they could have more (and that was after already having seconds)

We did a bunch of cupcakes with an 8 inch cutting cake.
During our tasting and consultation with us, they gave every attention to our wants and needs. I really appreciated that they sat down with us and did not give their attention to any distractions. They also have a great selection of cakes fillings and what was best was that they were all really tasty. We did 3 different flavors for our cupcakes: almond, banana, and lemon. Our cutting cake was almond

the photos came out great and our guests had so much fun, the staff they sent over to oversee the booth was very thoughtful and courteous. and the best part was that it was so much FUN. our guests really enjoyed it. it also really helped to fill up the cocktail hour

I will start by stating: I still give the place 3 stars, but my recommendation to anyone who would like to come here is that you should have a LOT of support from your friends and family, and don't expect too much from Coyote Hills. We had both our ceremony and lunch reception at this location. We chose this place for the beautiful setting and the convenience of having a nearby large reception area (with a great view). The main wedding site is gorgeous with the waterfall in the background and the flowers coming into bloom on the gazebo above us. My husband and I said "this is IT". He proposed in front of a waterfall so this setting was absolutely fantastic. At the time of our wedding they have a package that allowed us to bring in an outside vendor to cater our food. The SERVING staff was very friendly and helpful (or at least attempted to be helpful - more on this later), but that was it. The onsite coordinator provided by Coyote Hills was not so organized. She (Michelle) was very difficult to get ahold of, and some of my guests called her "snooty". Her assistant (Ashley) was of more help. Here are SOME of the issues we had to deal with: * They had made a mistake in their accounting process and did not tell us of the mistake until DURING (yes DURING) our reception, and billed us for the difference at that time - We really thought that was in bad form considering it was their mistake and it was the day of the wedding and we are in the middle of our celebration. It would have been better for them to have contacted us the day before so that we can make arrangements instead of being surprised by it. We had finalized everything WEEKS IN ADVANCE and so they should have known of any discrepancies by then. If they had BARELY realized it THE DAY OF the wedding event I think that they are the ones who should be responsible for their mistake. * We had our rehearsal scheduled for Thursday the 23rd. They said Friday (day before wedding) was unavailable, and we worked out our schedule so that we can do other preparations on the Friday. We made this arrangement with them early January. However, (after we had already sent out invitations (so our bridal party and Godparents can take time off work or make class arrangements) and made restaurant reservations, they called us on Monday the 13th to tell us that we needed to move our rehearsal to Friday because they had overlooked that they had a meeting on that Thursday. After some discussion we ended up only having to move our timing a little bit, but was able to keep our day. * It was also difficult arranging our food tasting (and this was only for appetizers. We called several times to make an appointment. Eventually, with less than a month before the big day, we had to resort to crashing someone else's food tasting and going to a bride show to taste the food. The appetizers are tasty. * They only gave us about an hour or two to set up for our reception, and even though everything did end up coming together really well for our wedding and reception, it was mostly due to the help of my friends and family. The serving staff tried to help us, but was told to NOT help us by the onsite co-ordinator even though they saw that we were struggling to keep on time, and all they were trying to do was help arrange tables and chairs. I gave the 3 stars because MOST of the people