Our wedding rocked! It was the most awesome day! The weather held out for us and we had our pictures done outside. Our ceremony was beautiful and the reception was awesome. Thanks to all our family and friends that came out and made our day a truly memorable one. 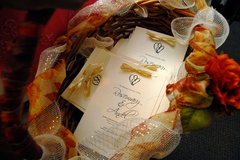 Pastor Grimes was wonderful to work with and made our day very special indeed. Thanks Pastor Grimes!

Tina and her crew were exceptional! I booked my trial run, the day-of hair and make up, hair and makeup for one other bridesmaid and mani and pedi's for my other 2 bridesmaids. Leaving I felt like a princess! Tina and her girls are very sociable and we all had a blast! Even though there were other wedding parties ahead and behind us we never felt rushed or "herded" or in a hurry. Thank you so much to all the girls at Fandango!

I booked our limo online and spoke with Paula several times on the phone. She is an amazing character and was always a pleasure to talk to! She was very accommodating and even though we changed our dates and location quite a few times she was alway patient and understanding and never made it seem like a big deal at all. Lorne was our driver and he was great! We truly did luck out with an awesome limo service and I would highly recommend them to ANYONE! Thanks Paula, Terry and Lorne for putting the cherry on top of our day!!

The hall itself is getting a little "grungy" looking. The floors don't look like they've been properly stripped and waxed in years and the flies were atrocious! We had to put up fly catchers and were swatting them like crazy when we went in to decorate. Having said that, the Ladies Aux did our meal and they did a fabulous job and I have to say that for what we got for our meal they could be charging alot more and it still be well worth the money! They were wonderful from beginning to end and they completely exceeded my expectations. The only little thing I would have changed is that they served the ceasar salad in disposable dishes. I didn't really like that but other than that...awesome!

Beth was great! She was there from the salon through to the end of the night. We haven't got our pictures back yet but she did send me 3 to preview and they turned out so much better than I ever thought they would! She took so many pictures but she was never "in your face" there if you know what I mean. I found Beth on kijiji and I would highly recommend her to anyone looking for a photographer. She is very reasonably priced and worked with me and within my budget to find something that worked for me.
Again, I would highly recommend Beth to anyone, she was fun to work with and she takes amazing pictures!
Thanks Beth!

The Ladies Auxillary did our dinner and they did a wonderful job. The food was great! I can't say enough about the job these ladies did. They bent over backwards to accommodate us however they could and made our day just that much more special. Thanks ladies!

Meredith not only decorated our hall but she also did all the flowers for the day. She was great to work with and was very patient with me, even though I changed my mind like a million times. There was a little discrepency about pricing which Meredith resolved quickly and professional and I highly appreciated it.
There really only one thing that I wasn't happy with and that was the tablecloths. I had specifically asked if the tablecloths reached the floor because I didn't want to see the table legs. Meredith assured me that they did in fact reach the floor, however when I went in after it was set up none of them reached the floor. I was disappointed but at that late stage in the game there was nothing I could do about it. There were also a number of smaller things that I was bothered that I won't really get into because I think that they were just more me being picky about things than anything else.
I received a TON of compliments that night on the decor of the hall - even from the vendors! Meredith did a great job and despite my one "craw" I would highly recommend her.

The tuxes looked great and I was pretty happy with them. I didn't like that you can't try on the suits anymore. A picture is one thing but what it looks like on someone is totally different and it would have been nice to see what different jackets would have looked like instead of deciding out of a book.

Kevin was our DJ... I liked his personality and he did a great job. I would recommend him to anyone looking for a DJ. Thanks Kevin!

Just FYI, this shop is in Stittsville (which is West Ottawa). I bought my dress here second hand and I thought it was beautiful. I made some changes to the dress to make it "mine" and Becky did a great job in helping me with my "vision" for the dress. The only negative experience I had was that the alterations took months. They wanted my dress back in the shop for April (my wedding was in August). My dress actually sat there for almost 2 months before anything was ever done to it. I had to bug to get it done and I don't think I should have had to do that. And the alterations were way more expensive than what I thought they should be but that was my bad for not asking first. I just wanted what I wanted and that was it. I ended up spending on this dress what I would have spent for a new dress in the end but live and learn! Other than that I would recommend them. I am actually going to take my dress back to them and have it put on consignment now.

The church was beautiful and I couldn't have imagined our ceremony anywhere more perfect.

The hotel was way better than I expected. I have stayed here before and didn't really care for it but thought I would give it another try. It was great! The rooms were nice and clean and the restaurant downstairs was good. Especially the Sunday morning buffet! Yummm!! We had an adjoining room, one for us and one for the kids. On the day of the wedding, it was one for the girls and one for the boys to get ready in. It worked out perfect!

We actually started off doing our pictures here when one of the neighbours approached us and said we could use his front and back yard. The park was nice (and quiet, which is why we chose here)

Explore More in Lindsay, ON, Canada