Beautiful flowers, we could not have asked for more. Everything was absolutely perfect and matched to the "T".

The best Tres Leche cake in the world, and the prices are outstanding and unbeatable. 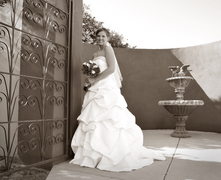 My husband and I had our wedding at Portico on April 3, 2009, and 30 days prior to the wedding we met with the owners Kyle and Amy Schafer to discuss the remaining details and provide a refudable damage deposit of $500.00. Two weeks after our wedding I sent an e-mail to Mr. & Mrs. Schafer thanking them for their services, and inquired about when to expect our deposit back. I received a response e-mail a couple days later stating that "according to the contract" they have 60 days after the event to return the deposit. We had no problem with this and sent an e-mail thanking them for their quick response.

Two weeks later I received an e-mail stating that due to financial difficulties and because other couples were scaling back on their weddings, everyone who had a Spring wedding would not be receiving their $500.00 deposit in full but would be receiving their full deposit in 10 equal payments of $50.00. The fact that we received an e-mail versus a phone call was very unprofessional to us, so we contacted an attorney who sent a demand for deposit letter to Mr. & Mrs. Schafer, in which no response was received.

In the e-mail we received regarding the payments that would be disbursed in full over 10 months, it also stated that we would be receiving these payments every month on the 15th. We received our payment in May on time but not for the full amount, because Mr. & Mrs. Schafer claimed that items went missing so deducted this amount from the $50.00 payments even though their e-mail stated everyone would receive a full refund (again another statement that was not followed through), but when the payment for June and July didn't come I proceeded to contact Mr. Schafer again receiving no response, and later received a check on the 29th of July for both June and July. I have spoken to numerous clients who are all having the same problem, and I find it funny how everyone received a check on the same date but received no response prior to the disbursement of these payments.

Apparently we have tried to settle this in small claims, but without a residential address and the owners signature we have yet to pursue our case legally. We have done everything in our power, but it seems that the owners have also done everything in their power to go into hiding and keep quiet. We are unsatisfied with the way they treat customers, and find it disturbing that there still in business not to mention treating people this way.