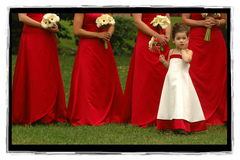 Marci was absolutely fantastic and was truly a pleasure to work with! My husband and I cannot believe how many beautiful pictures she took on the wedding day and because she gives you all the images, we have like 6 or 7 CDs full of beautiful images to share with family and friends. She captured the tiniest details as well as all the emotions of the day. There are some that make me laugh and some, like one of my mom’s face as we are saying our vows that bring a tear to my eye. How she managed to capture all of these tender moments in such an unobtrusive way is beyond me. Aside from the posed shots, you honestly didn’t notice her taking all these pictures! She also manages to put together a slideshow for during the reception with some of the pictures that were taken earlier I the day. We got tons of compliments on the slideshow. People loved it! And the best part…the pictures were waiting for us when we got back from our honeymoon! Thank you so much Marci!

If I could give her less than 1 star, I would. Erica JulianJohn Floral is in Fort Gratiot now, but is opening a store in Chesterfield. She hooked us with some great mock-ups, but when it came to the wedding day we were sooo disappointed. The flowers were nothing like the mock-ups. She did the bows on the bouquets wrong, everything was smaller, and the flowers were not as discussed. We paid for peonies and there were none! We also paid her to set-up the flowers for the ceremony and the reception, which was also a waste. She sent someone other than herself to deliver the flowers (she previously said it would be her) and they didn’t put the flower petals down the aisle, they just left us the bags to do it ourselves. Further, they mixed up the flowers for the tables at the reception and those that were for the bar, the guestbook table, etc. Luckily my Mom was there to fix it. Further, the father of the bride’s boutonniere looked like it was missing flowers. He is an important person, it should not have been smaller than those given to the ring bearers. Of course, this wasn’t what she showed us with the mock-up. Whatever you do, don’t use JulianJohn Floral (formerly known as flower depot).

Great food and service. The best