We booked them by using gigmasters.com . They were easy to work with, we told them the selections (and they even did a special arrangement for us for $50). My husband has a music degree and works in the professional audio industry, so this was a big deal for him – and he was very impressed with them. (I was as well, but missed half of the music since I didn’t hear prelude, etc.)

Just before our event, there was a Groupon for this company – I couldn’t pass it up since we were going to a Chinese restaurant for our rehearsal. We got 50 (actually 60 since they put extras in) chocolate dipped custom fortune cookies for $20. We had 5 custom messages and a variety of assorted dips (white/milk/dark chocolate.) They shipped from Indiana packed perfectly – with an ice pack & tons of bubble wrap. Not a broken cookie in the batch. They were a hit – both yummy & cute.

Oh my gosh, I would have been a wreck without Kara! I know there were some concerns several months ago brought up by another Knottie, but Kara was nothing but the absolute professional and went way above and beyond her duties. We booked her before her prices raised, but I would pay her current rates if I needed to! We did an engagement session with her in October – and she created our guest book from those pictures (which, by the way, was a HIT!! Everyone commented on how cool that was. If you’re thinking about doing something like that, I would highly recommend it. I’m sure you can do something on your own on Shutterfly or a similar site.) Kara was there from beginning to end, and I am just so impressed with her pictures. She did so much that she didn’t have to – from zipping me into my dress, bustling me, putting my veil on to explaining the best way to cut the cake. Highly, highly recommend Kara!

We used a limo for 2 hours prior to the wedding (4-6PM) and a 24 person mini-bus from 5-6PM and 10P- 12A as a shuttle to/from hotels. We got a pretty good deal in terms of cost and the vehicles were in very nice condition. My only glitch was with the limo. Perhaps I was a little aggressive in how many trips I thought he could squeeze in to that two hour time frame, but my last group of people were stuck waiting at the Westin and ended up taking cabs to get to the ceremony. Additionally, when I asked the driver to avoid the busy congested area (ie: Michigan Ave on a Saturday afternoon), he did – but he took the next longest way instead of multiple options that would have had less traffic. If those kinds of things are not an issue, then I would definitely recommend them – or just have the desired route spelled out ahead of time. All in all, everyone got to where they needed to be – and the shuttle portion was awesome and appreciated by the guests. 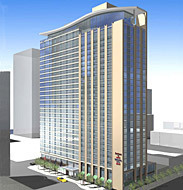 They had amazing rates for downtown Chicago at $110 per night, didn’t require a guarantee and were very accommodating. I used hotelplanner.com to get the contract, and both hotelplanner.com and the SpringHill were great with communication. They even gave my Dad and a Bridesmaid a complimentary bottle of wine for being VIPs. This is where most of my guests stayed and they all seemed pleased. 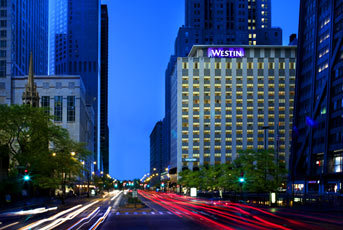 I am a loyal Starwood guest, and wanted to use at least one of their properties if I could. This was my more “expensive” hotel option for guests at $179 per night. They also did not require we guarantee a certain percentage of rooms be filled and upgraded the bride & groom to a suite for the wedding night. The only reasons I gave the minus – they charged $2.50 per welcome bag (which they delivered to the guest rooms instead of handing out at the desk, which is the reason for the charge) and I got really stressed out about the suite. I was intending on using this as my place to get ready (hair & makeup) the day of the wedding, and we weren’t sure we could get an early check in. After many emails and calls, they offered me a bridal room for $200 (which I had major objections to paying.) In the end, it all worked out perfectly. I happened to run into the rooms manager on Thursday when I was dropping off the welcome bags and she worked everything out. I was able to get into my suite at noon and it was perfect. 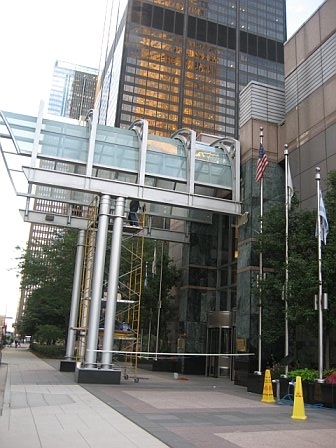 I can’t say enough good things about Pazzo’s! They are affordable (especially for city standards!) and have great food, fantastic location across from the Sears Tower, an amazing atrium and Fay, their event coordinator, is a godsend. We had both the ceremony and reception here. We opted for their lowest price meal plan, added passed hors d’ouvres and an extra hour of open bar. When I had a last minute accessory mini-crisis (not really crisis worthy, but on the day of your wedding EVERYTHING seems like a crisis) Fay stepped in with some very creative fixes. About 75% of our guests were from out of town, and they absolutely loved the location being right in the city. We’re city dwellers and really wanted to avoid going to the suburbs for our event if we could – and Pazzo’s made it a possibility. The staff all was amazing – down to the smallest details. When the server saw that Tom and I hadn’t had a chance to touch our entrees (due to mingling amongst the tables) they took them away and brought fresh meals for us to eat.

As the day got closer, we found out that our “reasonably priced” block at the SpringHill got filled up and we needed another option. We were able to get rooms here for $125 at the last minute. They were VERY accommodating. The only drawbacks were that we had to guarantee to fill 80% of the rooms, and there was a $3 fee to deliver welcome bags. But, they have a complimentary wine reception from 5-6PM every night, so our guests could enjoy that before the shuttle came for them.