Everyone raved about the taste and the decorating was beautiful!! She will create a master piece for you!! 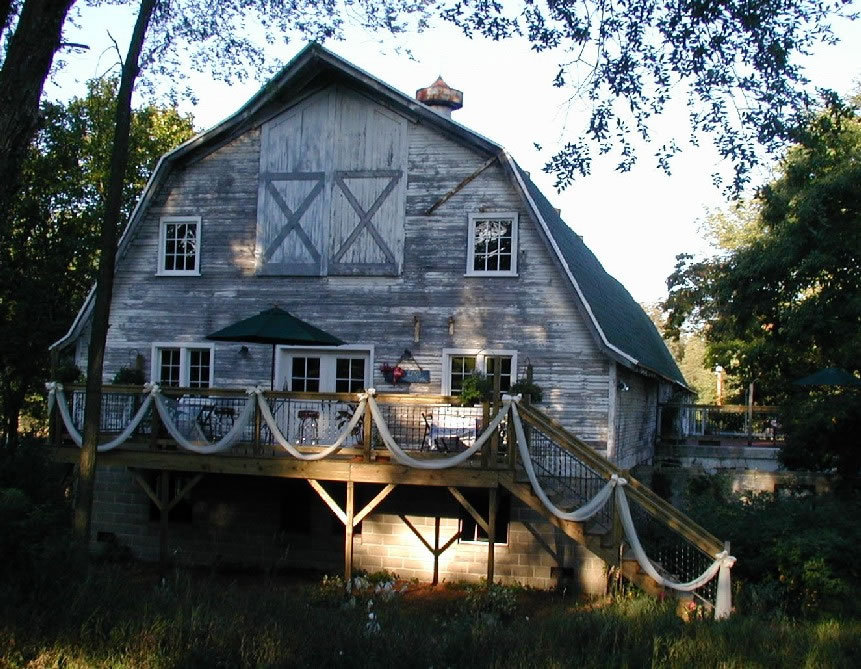 We recently had our wedding at Blue Dress Barn. My wife really liked the barn and the decorations for their rustic feel. Although the decorations are nice, they will nickel and dime you to death. For example, if you want to use an extra cocktail table or an easel that is already in the barn, no hauling necessary, it's $10 each for the tables and another $20 for the easel. If you want to use the paper lanterns they are included in your price, but if you don't want them, they will take them down, but they don't deduct that from your cost. My advice, leave them up to get the most bang for your buck, I mean you end paying thousands for those 14-15 lanterns anyway. When we had our wedding, they promised us that we would have a person from their staff taking care of the trash beginning at 6 pm. However, when we got there, trash from the previous night was still there. Since it had been raining all day, we ended up walking up the muddy hill to their residence to ask for trash bags. That's when one of the owner's decided to come down and help. Our bartender ended up changing trash bags behind the bar all night. We were also promised that the napkins would be folded and ready on the tables, but to our surprise none of the napkins were folded. They were folded in simple squares, but that's not what we went over with the owner. In fact, she folded an example napkin for us and "noted" in our file that's what she would do; didn't happen and we just so happen to have the picture to prove our work. During set up and delivery the owner's are no where to be found. My aunt and cousin who were setting up, had to call her on her cell phone in order to get the other vendor's questions answered. At the end of the night we had everything packed up and ready to go and we asked the staffer if it was ok to run home and grab a truck to haul some of the things back (5 minutes away), she said no problem. We did end up leaving about 1 hour late, but everything was packed and ready to go we just didn't have enough vehicles. And what do you do here when their staff is telling you it's okay? The next day we had a $215 charge to our credit card for being late....which again the staffer stated was fine and she stated this to 4 different people in my family. However, we were not notified this charge was taking place and we received the receipt and invoice for this charge 3 days later. In my opinion this is very sneaky and not the correct way to go about billing. We tried contacting the Blue Dress Barn 4 times before they answered, which was a week and a half later. The owners may seem laid back, but they have very poor social skills. He was rude... likes to yell a lot and ends up hanging up on you. On top of this when we owed our balance we asked them if he preferred a check or a card for payment. We only live 5 minutes from the barn and didn't mind dropping a check off to him in order to avoid the $15 charge for every time he swipes your card. His response to every thing was, "It's in the contract." There is a right way and a wrong way to do business and these people do it the wrong way. They are awful business people and although I had a wonderful wedding there, their actions have overshadowed all of that. Although the wife (Amy) seemed very nice and easy to work with, the husband (Kirby) is a complete jerk. We had heard this from other people but had not experienced it so we thought it was fine... we should have listened to our friends. He will monitor every step you take in an effort to make a dime. Before the final charges, we had paid $2700 for the venue, so the extra $215 is just a drop in the bucket compared to what he already had from us.

They are hard to contact and will only return calls or emails when they are booking new customers. It took me several attempts to reach them on every occasion. On top of that, they have both sent me nasty emails and letters in the mail when I complained about the $215 charge.

I suggest you visit the Better Business Bureau at www.bbb.org before you give these people your business.

My suggestion, go somewhere else if you want to avoid hidden charges and headaches!