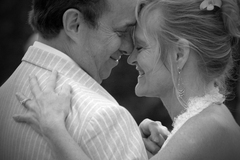 The new marriage bureau in NYC is wonderful. We had a wonderful experience. It's very new and tastefully renovated, and they provide private chapels and a great back drop for photos. Highly recommended.

Jeff and I had to choose between having a big wedding or purchasing an apartment. Like so many New Yorkers, real estate prevailed! So we came up with the great idea of having a very small civil ceremony at City Hall followed by a small lunch. Only immediate family were invited and the party was under 10 people. As a way to compensate to the many other family members and friends who would not be able to be a part of our special day, Jeff and I had an idea; we decided to hire an amazing photographer to document our day so we could share our moment later in time at our house warming/wedding party a few months later! When we decided on this approach, I immediately thought of Ben Hider. Ben has been a close friend of my sister Elicia for years. Ben's work is just amazing. I remember looking at his photos of India and just being able to feel like I was in India because of the way he captured moments. So many of his photos beautifully capture a moment and do not feel staged. This is exactly what we wanted! I explained to Ben our idea and he loved it! He came to our hotel and began shooting photos right away. I love the pictures he took of my sisters and I getting ready. We are hardly ever together and now we have these amazing photos to share. We also requested a few of the traditional staged photos, and they are just magnificent. I personally feel like I am not photogenic, but I have to say, I feel as though I look beautiful in the photos that Ben took. By the end of our day, we have approximately 253 photos sent to our email through a great service known as photoselter.com. Jeff and I sent our photos to everyone, and the responses were astounding! People fell in love with our photos. Some commented that they had never seen a wedding documented in such a way, and that it was the most interesting idea that they had seen in a long time. Everyone said the photographer really captured the love between Jeff and myself, and took other photos that exemplify the fun everyone was having. In short, we both adore our photos and we are grateful to Ben for being so wonderful and caring. Also, it was as if he was a part of our family. He was the only other people that shared our day, and I would not have wanted it any other way.

The new marriage bureau in NYC is wonderful. We had a wonderful experience. It's very new and tastefully renovated, and they provide private chapels and a great back drop for photos. Highly recommended.

If you are looking for an alternative place to have a great wedding, check out Broadway East. My husband and I decided to have a small private lunch. We decided this two days before we got married, and BE accommodated us beyond belief. We had the whole place to ourselves. We had a menu with three courses and 3 choices for each course. The food was delicious. It's also vegetarian friendly and sustainable. Highly recommended!