Our wedding was incredible. Truly the best day of our lives!!! We had been dating 10+ years and our union was truly a celebration. I would say the key things about planning a wedding include great music, food, and excellent photographers to capture our day. Our only disappointment was with our flowers (see review of Anna's flowers). However, on our wedding day it hardly phased us and the day was magical. We rocked out with the Michael Benson Band until midnight and rode home in style in a rolls royce by British Motor Coach. It was perfect! 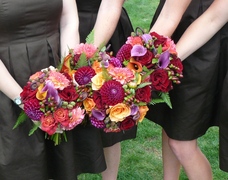 This was our one and only wedding disappointment. We hired Anna after interviewing several florists and thought she would be a great fit for our wedding. She totally understood my vision, and even did a mock up of the centerpieces a few months before. Her communication via email was prompt, and she seemed like she was very excited for our wedding. We thought we were her only wedding that weekend which is what she told us in an email the week before the wedding, and expected for the $4200 our flowers cost. They were very important to us and we had items like gardenias, orchids, and peonies which were costly, but worth it since we really wanted our flowers to be beautiful. We later found out she had also agreed to do another wedding the same day which was extremely disappointing and likely related to the significant issues we had.
On the day of the wedding, she was 45 minutes late for setup. This would not have been a problem had she not volunteered to order some candelabras, pillars, and crystals from Rented Elegance as stands for her flowers. We had planned to have Rented Elegance just deliver and setup but she offered to place the order so we could have a discount. Since she was late and she said she didn't realize how much she had to set up, and she stated that Rented Elegance just "dumped" their items and forced them to spend more on the setup of that stuff than expected. (However, parties at Rented Elegance and our venue said that the Rented Elegance staff actually waited for her to show her how to do the setup, and even did some of it before she finally arrived). Either way, the flowers REALLY suffered.
Our centerpieces were over $100 each and were supposed to have a base of hydrangea with roses, peonies, some dendrobium orchids, and hanging amaranthus. Well, the hanging amaranthus and orchids were on 1 freaking table, and half of the other centerpieces looked like they were just the cheap hydrangeas and nothing more. We have photos from the mock up and the centerpieces are clearly lacking on the day of the wedding compared to the mock up. On top of it, when she had to leave abruptly to go do another setup, she and her crew left buckets of water and flower stems on the dance floor that the Sahalee staff and my bridesmaids were left to clean up. And if that was not bad enough, she forgot the arrangements for the cocktail tables, only gave us 10 of the expected 14 bouts which caused us to have to use corsages (which were also supposed to be for the wrist per verbal discussion at the mock up, but were not made that way) as bouts, and our grandmothers, and the Officiant went without flowers. We have a photo of the box of bouts and there are clearly 5 gardenia bouts and 4-5 dendrobium orchid bouts, but neither of the 2 orchid bouts for the grandfathers, and no extras. It was really sad on my wedding day to tell my 2 grandmothers they would not get to wear their corsages because the florist did not supply the proper number. She also forgot to bring another arrangement that was supposed to be at the entry of our venue.
Honestly, I really liked Anna and these mistakes did not really affect me on the big day but as I look at the pictures, I am bummed. We corresponded via email so I could ask her about these problems and her response was to blame the Sahalee staff, Rented Elegance, and take NO responsibility. We asked for a refund check and she said she would send it for the cocktail arrangements only, but that was 4 weeks ago and we have heard nothing.
The only reason she did not get one star from me was because I loved my bouquet and the bridesmaid’s bouquets, and the gardenias were incredible. Many people from the photos would never know that anything went wrong, but especially the issues with setup, missing items, and the lack of professionalism in taking responsibility after the fact was most frustrating.

These guys have a reputation in Seattle they most certainly deserve! They made our wedding! They stuck to the songs we picked out of their 12 page song list but added some other favorites, including Lady Gaga "Just Dance"! Michael also learned new music for our ceremony and did piano with my cousins who sang Natalie Coles "Everlasting Love" as our recessional! They asked about the volume, song choices, etc. throughout the night and were a HUGE hit with all generations. They kept the party going until the very end! They were fun, energetic, so easy to work with and VERY responsive via email prior to the big day, and just AMAZED us and our guests. We want to have an anniversary party next year just so we can have them play again!

Bonnie from New Renaissance cakes is phenomenal. My husband and I showed her a sketch that we designed based on a picture in a magazine, and she recreated it with every detail. She used rolled fondant to create beading, airbrushed parts of our cake silver, and offered suggestions to make the design even better! She was easy to work with, she delivered everything as expected on the big day, and we get a 6 inch cake on our 1 year anniversary! In addition to being stunning visually, the cake was AMAZING! Her flavors were incredible and we still get compliments about our cake.

I got my dress here and had alterations done through them. All of the sales consultants were very patient during the dress selection process and every person I encountered I had was friendly and attentive. They were very happy to work with my budget (I paid $2k for my dress and they sell dresses up to $6k), had a huge selection, and the runway was amazing! They let us come in and drink champagne for my preview appointment (my dress arrived on time in exactly 6 months as estimated) and even stayed until after closing to let us enjoy the moment! After 2 fittings, my dress was altered perfectly. I also ordered my veil through them and it was the perfect shade of ivory to match my dress. I would highly recommend this place.

Incredible wedding venue. At the time of our wedding the flowers were in full bloom and it was a gorgeous setting. On top of amazing food, a beautiful blank canvas to decorate as you desire, the wedding coordinator Colleen was so helpful and genuinely excited to be involved in our wedding. Would HIGHLY recommend this place.

The service was fabulous, food was great, and it was so fun!