We had the best party ever thanks to the wonderful DJ and assistants at Sounds Abound! Its like they knew every song we wanted to hear! Couldn't recommend more :)

Ernesto was fantastic! Professional and lots of fun! Our guests were on the dance floor the whole night. Definitely recommend!!

We worked with Danny and he was awesome! Sounds Abound lets you identify a "do not play" list and none of the songs we put on there were played. He was not too cheesy and he did a great job of gauging the mood on the dance floor and playing songs that kept people dancing. He never played a song that cleared everyone off! Our friends were dancing until the very end of our reception thanks to Danny at Sounds Abound. I would recommend them to anyone looking for a DJ in the western suburbs of Chicago!

Sounds Abound is a great DJ company. They are very detail oriented to make sure everything goes smoothly. Our DJ Keith was great - we'd definitely recommend him!

We were so happy with our DJ Matt Ammons. He did a great job and we got tons of compliments from our guests.

Danny was our DJ. The dance floor was packed all night, and he was really a great/fun guy to work with.

We got married August 1st and people are still talking about the reception and the DJ. David Wilner is great!

This is one vendor you don't have to worry about. They follow up with you before you have a chance to follow up with them. Our DJ was awesome and got back to me quickly with any questions.

Fantastic job! Mark was fun and did great job with mood changes and announcements. Fun times!! 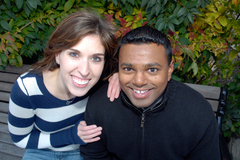