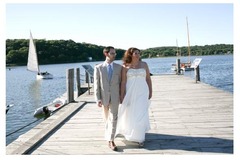 The most fabulous cake in the world! NOT your typical bland wedding cake, the Cake Lady does moist, delicious cake in a million possible flavors. We opted for five flavors of cupcakes, with a topper for us to cut and save. The cost is more than reasonable, too! 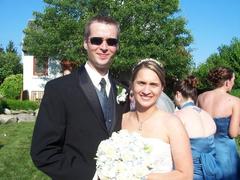 Our cake was beautiful. She decorated it exactly as we asked for it.

Please keep in mind before choosing her for a wedding or other occasion. I will do my best to be accurate, including saying what I did; also the quotes are paraphrased to the best of my ability: I ordered 2 cupcakes, then took out my card to pay for them and was told she pays a ~$1.00 transaction fee (that's high for two cupcakes, isn't it?) to use a credit card. I know many gas stations and even some other business offer a cash discount. I offered her cash if I get a discount: I’ll give you $3.50. I was talking to the clerk, who asked the owner if $3.50 would be okay if paid in cash, and the owner said “yes”. I gave out four one dollar bills, and received $.50 back. On my way out I was looking at ads on the wall when the owner said, “You had more $ on you!!!”. I said, “yes”. She said, “I thought you had no more $ on you & what you did was wrong”. I replied, confused: “I offered an amount between the transaction fee and the regular price. I don’t see what is the problem”. In hindsight, I see that she didn’t realize I was offering to save her and me $, but somehow she was so intensely angry that she didn’t see the misunderstanding, and shockingly proceeded to berate me. It was hard to know what to say since this was the 1st time I had been in this situation, so I said: “Look, since it isn’t legal to have a credit card minimum, but there can be a cash discount, it should be fine for me to ask”. (Merchant processing companies also have a legally binding contract that you can’t try to dissuade the customer from using a credit card…). She said: “You used your knowledge of the law to scam me; don’t come back”. I felt sick at this point, but still talked: “No. I had no scamming intent whatsoever. It was nothing more than what I just said”. She said I can come back if I don’t do that again. With little reason to do it again, I agreed. Several months later my wife was thinking of getting a cake for a party and I said I heard the Soup Lady and Cake Lady is now just the Cake Lady, therefore maybe the angry owner I talked to was gone. Now, the cakes are pretty good there (if they were great, I’d have been back, as I was allowed to be). I called today and asked the owner if she was the one I had the disagreement with. She said yes. I said, “I feel I am due an apology because I didn’t do anything wrong”. She still doesn’t see the misunderstanding, apparently, because she said “No. You were wrong.”. We talked briefly, then she hung up on me. Enraged, I called back seconds later and was told she was gone (w/in seconds???). Note I called after seeing many reviews online in which people had problems with her or the cakes, and on person said he/she hopes she goes out of business. I said to leave her a message that “I’m going to review her online if this isn’t resolved”. I was soon hung up on by this person (assuming it was a different person). I called back a # of times, with hang-ups. So, lastly I called and said in a fast agitated voice: “I never swore at anyone; I am being hung up on…”. I was interrupted: “I have the right to refuse service to anyone and if you call again, I’m calling the police”. OK, I was too persistent, but the police? Anyway, I give the food quality a 3 of 5, but 2 of 5 when considering the price, but the service is a 1 of 5. I average this to be a 1 of 5 experience. Per other reviews I’ve found, http://www.youtakethecake.biz/ is better for quality of cakes, Stop and Shop has improved their cakes and has some that are close to the Cake Lady cakes. ShopRite has some good cakes, even real buttercream upon request.