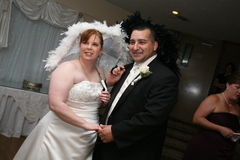 We live over 600 miles from the Castle and did all of our planning by phone.(I know, I thought I was CRAZY, too!)The biggest chunk of our budget was tied up in our venue but I can wholeheartedly say it was the BEST money we spent!
Dolly was so easy to work with - keeping us on track, giving us honest, HELPFUL advice and she ALWAYS returned our calls. The food was truly delicious (Brisket! Blackened Catfish! Twice-baked Potato Casserole!) The Wedding cake (Vanilla w/ Cream Cheese Buttercream) and the Groom's cake (Chocolate w/ Bavarian Cream filling)were beyond yummy. We way over-ordered cake and had so little left over that our guests actually fought over slices at the next-day brunch. Thankfully, we did not have the problems like the July 2007 wedding reviewed here. I think the Castle has upgraded their indoor & outdoor sound systems since that review was made. I also carefully planned all of our music and was very glad to hear it beautifully played.
Our guests kept telling us how blown away they were with the beauty of the Castle, complimenting the attentive staff and saying how much they LOVED our wedding, how much FUN they were having. Isn't that the best compliment you can have? Even now, 7 months later, our guest are STILL talking about it!
My husband & I did NOT have a "castle" or "fairy-tale" theme, but that's what our wedding day really felt like - true magic.
I can not say enough good things about the Castle, Dolly and her staff! 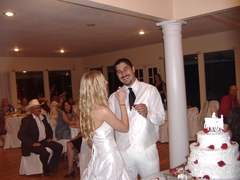 Although the LA Castle is a very beautiful place to get married, I would be cautious when booking them. We had a destination wedding and people traveled from all over the US to see us be married. They have a list of music that you can use for the ceremony so we used part of what they had while the mother's where escorted in. Well, the CD kept stopping and starting. It was horrible. We used a CD I had made for the rest of the wedding and it was fine, so I'm not sure what the deal was with their CD. Then, their sound system did not work during the ceremony, but no one stopped us to tell us that we were not being heard by any of our guests. Basically the only people who heard our ceremony were the people who were actually in the ceremony. This was very hard for our parents. What is even worse, is that I found out that the very same thing had happened to a couple the week before. They apparently had a new microphone or system on order, but it wasn't in. It would have been very nice if they had told us that, we could have used our DJ's equipment. At the end of the ceremony there was no one there to tell the guests or the wedding party where they needed to go. It was all very disappointing. When we asked if we could get some of our money back, the manager said she would have to speak with the owner. We even asked if we could have an hour or two extra on the reception to make up for it, but she came back and said all we could have was an extra 30 minutes. The reception turned out pretty well. Our DJ really made up for everything else, and everyone had a good time. Everyone was so disappointed over not hearing the ceremony they requested that we say our vows again during the reception, which is what we did. We had written our own vows (as well as put together a very nice ceremony, it's a shame no one heard it). I will say that the food was fairly decent, didn't hear any complaints. My mom wrote the owner a letter detailing everything that happened, but they never responded. A simple apology would have been nice, but the staff acted as though it were not a big deal. As I said, it's a beautiful setting, but be cautious when booking this place.