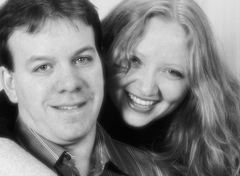 Aside from the man I married, Felix might just be the coolest guy on the face of the earth.

Before finding Felix I'd felt sorry for whoever would end up shooting the day since there were several photographers on the guest list who would go over the shots with a fine tooth comb, and then Mike introduced me to Felix.

I'd been impressed with his portfolio the second I saw it but I don't think I really got it until after the wedding, when he showed us the first cut of our album. Felix doesn't just take a great photo, his shots capture a moment and a mood that's impossibly difficult to get on film. And he does it over and over again. He shot details and subtleties that anyone else would have missed but that he knew would mean the world to us. I cannot thank Felix and his wife enough for what they've give us.

And to top it all off Felix is an absolute gem to work with. I'm horrifically uncomfortable on the other side of the camera but Felix makes it comfortable and fun and creative.

If I could only give 1 piece of advice to future brides it would be to hire Felix, best decision we ever made.