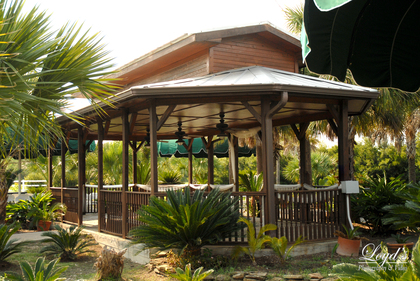 
Covering 6.9 acres, we feature three elegant reception halls, an enchanting wedding chapel, a gazebo for outside ceremonies, a pituresque waterfall, extended stay cottages, and a firework show at the end of evening events. We can also accommodate rehearsal dinners, bachelor(ette) parties, wedding showers, and more!

I attended a wedding at Spring Chateau in August 2014. Overall it was a lovely event and the fireworks at the end of the reception was a perfect ending (although I could not help to feel it is an excellent way to get guests out of the building to met their, “you must be out by 10p.m.” dead line.)

There were issues. I found Janie to be extremely rude. Which I could not understand. Weddings are one of the happiest day in a couples life, why would this women be so unpleasant. I was in the reception area, headed to the cottage to visit the bride. Janie was EXTREMELY rude and told me I could not exit through the door closest to the cottage but had to exit the opposite door. She had put a chair in front of the closed door which was later removed. I thought this was childish and uncalled for and I questioned her reasoning. She was also rude to the outside caterer and extremely rude to the brides mother.

The brides mother had requested front row chairs in the Chapel to be removed to allow more room for the bridal party. They were moved to the Chapel restrooms, making the women’s room unuseable. I had to move fifteen to twenty chairs to gain access, besides the fact it looked extremely unprofessional and like a storage room. The chairs were also in the mens restroom. Making the restroom unuseable, grandparents and guests would have to exit the Chapel and locate the restrooms in the reception building. Totally unacceptable.

The Cottage where the bride and bridesmaids dressed was extremely hot. Actually the only area that had adequate air conditioning was the Chapel, except for the area where the bride enters from behind closed doors. For an August wedding, not acceptable. The groom and groomsmen dressed in rooms off the reception area, also not adequately air conditioned.

This is minor. The photo booth was fun but the accessories you put on for the pictures looked like they had seen better days and there could of been a better selection.

Like I said, overall it was a lovely wedding. The grounds are very nice, although I don’t believe the outside waterfall was ever turned on.

Would I consider booking a wedding for a family member at Spring Chateau? Not if I had to deal with Janie. And the air conditioning issue was resolved. (I understand a wedding was held during the winter and the building was so cold guests left early). Like most businesses, everyone is super nice till they get your money in hand, then the true personality shines.

This place is terrible...more to come on how these people screwed up my friends wedding, even the owner interupted the wedding and threatned the father of the bride and the father of the groom. Lucky for the owner, the groom had no idea what was going on or well nevermind. They also started 30-45 minutes late because the stuck another wedding in the chapel and made our wedding run late, then they made us leave early. Their bartender is the worst bartender (willie) in the world, him and his wife or whatever she is. If they tell you that you have to use him, find another venue. in fact, dont bother looking at this place, my friend is in the process of looking for an attorney to sue this company for breach of contract. DO NOT USE AND DO NOT BUY IT WHEN THEY TELL YOU ITS UNDER NEW OWNERS AND MANAGEMENT, ITS A LIE AND THEY ARE ALL ABOUT SCREWING UP YOUR WEDDING. THE WEDDING COORDINATORS THERE HAVE NO CLUE AS TO WHATS GOING ON. IF YOU HAVE TO USE THIS PLACE I FEEL REALLY SORRY FOR YOU!!!

To be honest with you, the only way I can see these people getting a good review is if Spring Chateau created accounts on here and made all this good stuff up!! I encourage anyone who wants to know the truth to email me at [email protected] and I will be glad to explain in further detail how terrible this place really is!!

Excellent place to have an intimate wedding with family and friends. They have space to accomodate any number of guests you'll be hosting and their staff is friendly and organized. They'll even call to make sure your payments are on time. Just make sure you get the facts on linens and other rentals not included in the base price before signing on the dotted line, but aside from that the prices are not bad at all.

A good location for us because we needed a ceremony and reception location in one.

Excellent Service! My understanding was this place was getting bad reviews but then got new management. well I am here to tell you the new management did a great job!

Our wedding ceremony and reception were held at Spring Chateau in Spring, Texas. The venue was pretty much all-inclusive. They even had different vendors that they special vendors that they had experience using for previous weddings and celebrations. Spring Chateau made everything easy and elegant. We would recommend them to anyone that would like a sophisticated, beautiful, and private ceremony.