Stay FAR AWAY. He ruined my dress when altering it. He also ruined two of the bridesmaids dresses while altering their dresses and ordered everything wrong. All of the girls dresses were ordered way too big. Not a single girl paid less than $100 for alterations and they were all swimming in their dresses when they came in. He ridicules you as your are in there for alterations and is very grumpy and irritable. Save yourself the torture and heartche. Try Le'June Marie (sp?) in Worthington. I wish I had gone there. 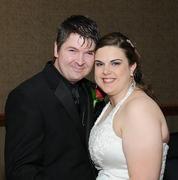 I'm neutral on this one. They were great with the bridesmaid dresses, they came in on time and looked great. We ordered extra material from the bridesmaid dresses to make a flowergirl dress and there was a hold up with the material that should have arrived with the dresses. It took a month for it to come in. They blamed the manufacturer for the delay, but I'm not sure if I believe them because they were also giving me the run around with my dress. My dress arrived much later than they originally quoted (2 months!), but did arrive perfect with out any flaws in the dress. My concern with Alan Ray Bridal is that instead of telling me that the dress was going to be held up a few weeks or even months, they kept telling me it'll be in on a date a few days down the road, or that they'd call the designer to find out about the dress and call me back with an answer. They never called, my dress also never came in on the numerous times they said it would be. I got quite annoyed by this and it also stressed me out that they possibly never ordered my dress - a situation I've heard come out of Alan Ray before and the bride discovered this only a week or so before her wedding.
In the end, the dress came with plenty of time because I ordered it several months earlier than I needed to (thank god!) and it was just as I was expecting, I just didn't appreciate how they handle their customer service.