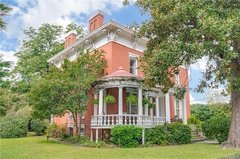 
Built in 1855, it’s enduring grandeur is at once impressive, inviting and warm. Listed as a “National Registry of Historic Places in America,” The 12-foot vaulting ceilings and windows in the home provide an open spaciousness and lightness throughout. The rooms, likewise, are clearly of another era, yet the beds and accommodations are new, modern and comfortable.
On April 3, President Lincoln met here with General Grant for the last time. Petersburg had just fallen and they awaited news of the surrender of Richmond, while discussing future plans for a reunified America. While Thomas Wallace had been an ally of President Lincoln’s in Congress, his wife was cousin to Confederate Lieutenant- General Abrose Powell Hill who had been killed in battle the day before. Though stricken with grief, the family welcomed President Lincoln and provided for seating accommodations for him and General Grant near the front door, where they conferred for hours before the ultimate surrender of Richmond. This is where the peace began!