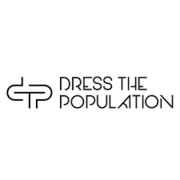 
In 2011, designer Franklin Morales founded Dress the Population with a simple idea – make beautiful clothing at an affordable price. The not-so-simple part was how to do it ethically. In today’s world, fast fashion rules and is mostly fueled by an exploited and underpaid workforce in the US and abroad. As an immigrant who had moved to the United States as a child with very little, he had to work twice as hard to make his vision become a reality. As the company began to grow, his priority was to help others with similar stories achieve the same ‘American Dream’ that he had. Because of this, design to manufacturing to shipment happens at our headquarters in Los Angeles with help from our diverse staff and our partner factories abroad.