Johnny B Limosuine Peterborough, ON 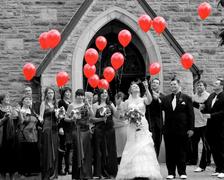 I guess I’ll start with what I liked about this company:
The driver was very courteous. He treated my bridal party like royalty and he was on time. The limo was very clean and looked great. The red carpet was a great touch!
*Clears throat before rant*
DON’T HIRE THIS COMPANY!!
This was my wedding day. In the morning my bridal party and I were driven to a spa and then we were taken back to my home to prepare for the ceremony. The driver left to grab a coffee because it was still 2 hours before we were supposed to be taken to the church, which would have been fine but 20 minutes before we were expecting to leave for MY WEDDING CEREMONY we received a call from the company saying that the limo got a flat tire on the way to getting his coffee and he wouldn’t be able to pick me up for MY WEDDING CEREMONY!!!!
My mother, father, three bridesmaids and I had to stuff ourselves into a Dodge Ram and do 160KM to the church. Makes for a great story and looking back it was hilarious but an incident such as thing could potentially ruin some ones wedding day.

Why didn’t they have a spare tire? Well apparently the got a flat a couple weeks prior and didn’t replace the tire they used. Shouldn’t a TRANSPORTATION company ALWAYS have a spare tire???
Anyways, the limo showed up at the church after the ceremony and managed to take my bridal party to the reception.
We received $200 off the $900 we were supposed to pay. Not exactly a great deal.
I understand this situation probably doesn’t happen ALL the time, but from one bride to another, don’t take the risk. Finding out the limo wasn’t coming was the most stressful part of my wedding day and it could have easily been avoided if they were a responsible company.

Explore More in Peterborough, ON, Canada