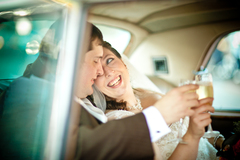 We really weren't concerned with anything in catering except that the food be tasty, the menu be personalized, and things go smoothly.

Jordan's is a GREAT catering company in terms of their menu. They will cook for you in a studio kitchen as they interview you about your lifestyle and food preferences so that you can taste a varied menu of fresh dishes to see how your wedding might shape up.

This company will work with you to try to fit your budget.

This company will go to almost any venue and they are self-insured, so you won't have crazy outside overhead costs.

This company will help you to find eco-friendly solutions that will reduce the budget on renting tables and chairs, plates and silverware, and glasses if you are going to be in a location that would require rental of all these things.

We were also really happy with the fact that Jordan's is very familiar with the staff and facilities at Architectural Artifacts, so that they were able to plan for our event very easily.

The reason that we have rated them lower, though, comes down to a few issues that are pretty major for a bride and groom:

* Communication is spotty and inconsistent. This comment refers to both the frequency/interval of communications through email and over the phone and to the contents of the communications. We had a lot of issues with being contacted, receiving replies to emails and phone calls, and having Pam, the "front woman" for the company remember exactly what we were doing for our event. We think that this was mostly due to the fact that it's a family company and they have a small customer service staff, so they're probably just overwhelmed with the front end of things (again, the food was delicious, and we were very happy with that!) which makes it very difficult to plan financially and time wise as you try to get a picture of the day.

*There was a shortage of food in our buffet on our wedding day. Actually, what we really had was that some people took seconds before some tables had been called up to the buffet. The problem was, J.F.O.D. had assured us time and time again that a buffet line would work just fine for our wedding because they would have staff manning the table and directing people so that everyone would go up once and the crowd would be managed on the wedding day. Unfortunately, on the day of the wedding, this was not so, so we had two tables that did not eat during the dinner portion and had to wait for food to be prepared and brought to the venue so that they could eat. There also was not enough food to take care of people who might otherwise like larger portions on the dinner, even though we had paid a little extra to make sure that we had a larger quantity. So the problem was threefold: J.F.O.D. did not keep to their promises for management of the food service and did not meet our purchase for extra portions, and on the part of our guests with extra gusto, more food was taken than Jordan's had anticipated (despite our insistence that this would be an issue with our respective families). **IMPORTANT**Jordan's was very apologetic for this mishap, and they did order White Castle sliders as a late night offering to all of our guests. They also offered us a dinner party (which we plan to redeem for our anniversary) to make up for the hiccup. So they did show real concern for the issue, and tried to rectify it. The sliders came so late in the night that most guests had left, but it was an attempt and we recognize it.

*Up-sells on decor for the tables and buffet were not worth it. Pam provides some beautiful decorating for the wedding--and they really are gorgeous. In our case, she offered us the rental of some trees that she had created for another wedding, and she offered them at a discount because she claimed that the bride from the other wedding had not claimed any of these at the end of the night and "left them all behind". Unfortunately, we paid $300 for four decorations that stood about a foot tall AND we lost our own decorations (pumpkins we'd picked for the wedding and intended to re-use at Halloween, some floral arrangements, a bolt of tulle used to decorate the stairway entrance to the reception area) to Pam's collecting at the close of the night. So, we felt a little cheated in this way. However, if we hadn't accepted the offer for the decorating, we wouldn't feel that we'd ended the incident in the red (taking a loss) on the decor. The only reason that this matters to us is that it wasn't clearly presented to us or discussed openly with us before, during, or after the wedding.

In all, the food was fantastic and the menu was very personal, and we really had genuinely positive experiences with both Pam and Jordan on a few occasions, but when it came down to execution, we felt that they came in below average, and we felt that there were a few last-minute verbal digs, some interesting twisting of the plans back and forth that would cut corners for the caterer's decorating/event coordinating--but not for our payment, and some almost-underhanded behaviors (taking our decorations, taking flowers from our florist as he did our arrangements to take home bouquets, pulling us aside while we were dancing at our wedding to paint the food shortage, at first, as something that was totally not on the caterer's shoulders and that wouldn't be remedied for those guests (very stressful, we think it was done this way to fish around and find out how far it could slide) and negative reactions when we had decided to go with our own (hand made, cheap, and, by the way, stunning) decorations and florist over hiring on Pam's services)that made us very concerned about making a gleaming reccomendation of this company to anyone hosting an event.