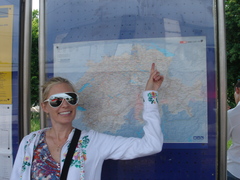 “I have never seen everyone at a wedding lick their plates clean like they did at your wedding.”

“Your wedding had the best food I have ever had…the midnight snacks were the most creative and inventive I’ve had.”

“That was most impressive that the Chef came out and you on your wedding!”

The compliments went on and on during and after our wedding about the uniqueness of Chef Horton’s cooking savvy and creative presentation. As a foodie and a former public relations representative for restaurants at the following Leading Hotels of the World such as Hotel Bel-Air, The Ritz-London, The Merrion-Dublin and Hotel Le Bristole-Paris, I have never seen a young yet poised and humble talent in a chef as that which Chef Adam Horton possesses.

It is rare to have a Chef be open to altering a dish to your liking or put the time into really thinking about how best to accommodate your palate. The chefs I have worked with have one way of preparing their menu and food, and it is their way. From the minute I met Chef Horton, I felt like I was part of his kitchen…he and his staff became part of our wedding party and part of our celebration from day one. His dishes transport you to a smoky, rustic old-world lodge. He defies the stereotype of most restaurants: “great atmosphere – poor food”. Saddle Peak Lodge: “great atmosphere – exceptional food”! His recipes are comforting, fresh, seasonal and inventive. My husband is from Texas and has had his share of wild game and said he has never had Elk or Bison like that which Chef Horton prepares. We had our wedding tasting during the end of Summer early Fall and fell in love with the sauces for the entrees we chose. In fact, we enjoyed them so much we were worried how the change in season may affect the dishes. Our wedding came around, and sure enough Chef Horton exceeded our expectations with sauces that were as scrumptious as the cozy, warm feeling you get sitting by the fire on a rainy evening at Saddle Peak. They were savory and each bite was a culinary experience in itself.

We also shared with Chef that we wanted to serve a late-night snack and wanted to let him run with it. The hit of the evening was not the mini bundt cakes I had brought in…it was Chef’s truffle mac n’ cheese balls and wild game mini corn dogs. Wedding blogs have been calling my photographer and coordinator asking for more information about the Saddle Peak Lodge Chef’s secret late-night snacks.

I have no doubt that Chef Horton will continue to raise the bar in the culinary world. He also has an inherent sense of who he is and I surmise that he will excel while maintaining his humble charm. He will not only be your Chef, he will become an ongoing memory for you if you choose to become a recipient of his creations.