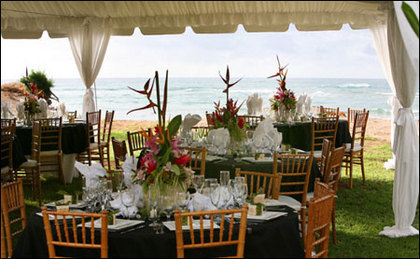 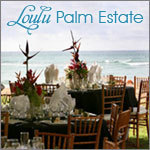 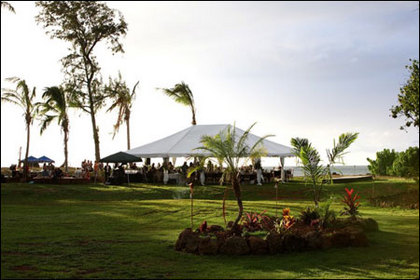 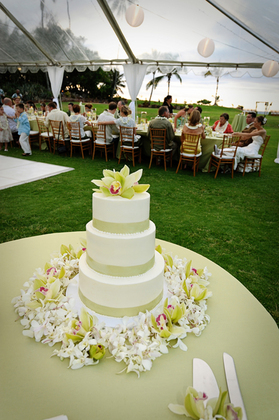 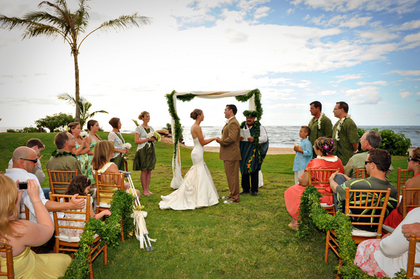 Named for the many "Loulu" Palms that grace this spectacular stretch of Oahu's North Shore, The Loulu Palms Estate occupies a secluded strip of Oahu's most celebrated shoreline. Azure blue ocean, white sand and tropical grounds.

Weddings can be set up literally a few steps from the ocean.... on the slightly raised grass just before the beach....or back on the expansive grass with panoramic views of the beach. It is truly your dream come true.

We love to talk to our prospective Brides & Grooms.....call us to chat about your dream wedding & visit our website for more photos & information.

I had my wedding here last August, and the location was stunning. That said, dealing with the proprietor at Loulu was extremely frustrating. First of all, I had booked this location before it became popular, so I got a very good deal. Perhaps, as a result of getting a good deal, the proprietor proceeded to attempt to upsell me for any additional services he could think of, as well as push his preferred vendors on me. (All of his recommendations were expensive -- the wedding planner he recommended was cheesy and not experienced at all; and when we caved on using his tent rental company; they were more expensive, and arrived late on setting up the tent on my wedding day).

Second, the proprietor was very flaky and difficult to get a hold of. I am located in Los Angeles, and planned this wedding by email and phone. When I called him, he rarely picked up. When I gave him months of advance warning on my rehearsal wedding date, he double booked it; and as a result, I had to have my rehearsal dinner days before the wedding.

To me, the worst offense was that when I told him I was renting a dole whip machine, which would require specific electrical requirements (which I gave him), he assured me the Estate could handle it. Unfortunately, it could not; and during dinner, the power alternated from being on for a few moments, then blowing out, leaving my guests in the dark. We had to unplug the machine for most of the night so that the power could sustain itself, but having spent several hundreds of dollars on the machine, only to not be able to use it, was extremely disappointing.

When I told him this would be a sunset wedding, he said we could set it up however we wanted, and that we could party all night if we wanted to because his neighbors didn't care. Days before the wedding, he informed us that we would have to stop the reception at 10pm, and that we could not set up chairs in a particular section of the property.

Despite what I've written above, my wedding was wonderful. The setting was gorgeous, and with the help of my family and friends, we worked around the proprietor's flakiness and misrepresentations, and in the end, I had an unforgettable wedding. Everyone loved the setting -- it was huge, open, and my sunset ceremony on the beach was stunning.

Just be warned that dealing with this guy was a headache that I'm sure most brides don't want to have to deal with. 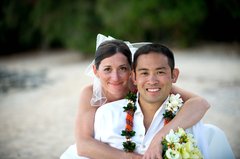 The venue is beautiful, you can't deny that. Scott comes across as easy-going and easy to work with and, he mostly is. He has published prices for different size groups - our original estimate was double our actual guest count, but Scott never asked for a final count. As a result we paid $500 more for the venue. Also, we originally booked there because Scott spoke of the lack of neighbors, sound ordinances, etc. However, music/karaoke at our reception was shut down before we planned because neighbors complained 2 days earlier of noise. Kind-of frustrating - but a beautiful location - WOW!