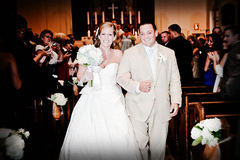 Service up to the date of the wedding: great! Friendly accomodating staff. Service on the day of the wedding: heart-breaking. The driver was supposed to make multiple trips, but apparently the lines of communication were screwy between what the company agreed to beforehand and what he was told to do...because he refused to make some of the trips, saying "it's not what I have written down, so I'm not doing it". We asked him to call his boss, refused. Some of our guests ended up having to take cabs to our ceremony. That's just the beginning. At the end of the night, he was also supposed to make more than one trip. Again, he refused telling us it was not what he had written down to do. He threatened to leave without me, my husband and our entire bridal party. He was nasty and uncooperative. He finally said he would make the "extra" trip if we tipped him, as he signaled with his hands "more money". At that point my husband was just desperate to get everyone back to the hotel, so he said that yes, he would give him more money. We were nice, just trying to not make a scene. Well, I won't continue on with the story and how ugly the driver got, but it ended up with a relative of ours who is a cop getting involved.

We felt that even though this driver had come close to ruining our night, that perhaps it was just that driver because everyone else we dealt with was extraordinarily nice. We had already booked our honeymoon car service through them, so despite this incident, still decided to use them. We had a wonderful driver to the airport who was so nice and friendly. We were then convinced that we just had a bad experience with one driver, not the company, and were willing to forigive. That was, until the trip back from the airport from our honeymoon. Our flight was delayed, and we called to let them know. Maybe I'm wrong to assume, but in my past experience with car services doing pick ups from an airport, they track the flight. It ended up that our plane made up the time that our flight had been delayed and we only got in about 20 minutes late. We called when we landed and the dispatcher told us that our car had been sent somewhere else and that we'd have to wait atleast 40 minutes. It was 1:00 in the morning! The car didn't actually end up getting there until 2:00 and it was a limo that had just come from somewhere else. It had empty beer cans and dead flowers all over the place. The driver was very apologetic, and obviously it wasn't his fault, but it just showed us that this company has many flaws and I would never use them again. I cried the whole way home from the airport from our honeymoon. I felt like they had provided such horrible service the day of the wedding, and we tried to give them another chance, hoping to be proven wrong.
I was so upset by both of these problems that I still have not even been able to call, months later, because I am afraid that I'm going to blow up on them, get inappropriate, and just not hold it together. I really wanted to ask for a refund, but I never got up the nerve to call to complain, let alone ask for a refun. I'm such a chicken! Please don't be me!