Very poor service and food at reception. The wait staff was rude and unprofessional at best and the food portions were much smaller than during the tasting and appeared to be microwaved. Leading up to the wedding my fiancé stopped in for a scheduled tasting and the receptionist would not acknowledge her presence for nearly 10 minutes. I realize the staff is made up of at-risk teens; however, I still expect a certain amount of professionalism when spending over $5k (probably closer to $6k). Part of the fee included a security deposit of $500 which according to their documentation would be refunded "no later than 21 days after the event". The envelop wasn't even postmarked until 25 days after the event. Not really a big deal but it shows their lack of professionalism and adherence to their promises. Additionally, they charged us $250 because they saw someone with a bottle of beer and an additional $100/hr to remove items from the rooms. 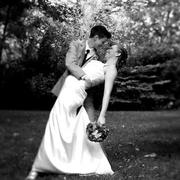 Our wedding reception at the Goodman Community Center was perfect! The staff at GCC are incredible. We found both the room coordinator and the catering manager to be friendly, accommodating and extremely helpful. They were sweet, flexible and very quick to respond to any questions or concerns. They were an absolute pleasure to work with.