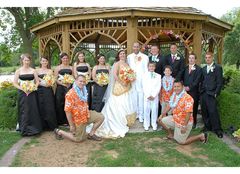 The food here is amazing! They got there on time and had everything set up when the cocktail hour started. I did hear that they could have paid more attention to how fast the appetizers were going to replenish them with what still to be put out, but otherwise the food was amazing!

We had a bit of a snag the week before because the computers at their office crashed so I never received a call confirming the final price for my final head count which was about 60 people less than we were quoted. The person who gave me the contract kept the original numbers and changed the amount of people.

There was also a miscommunication about who was cutting the cake. We understood that they were doing it, but they said they weren't.

I was a bit frustrated at this, but knew I could take care of it on Monday. I was surprised when the next day the owner called me to say sorry for the mix up and that he would cut me a check for the difference on monday. I went out to pick up the check and he had a little dinner package for me with a couple of nice steaks and some shrimp scami for my inconvienience.

Over all it was great food with a crazy mix up that was well worth it for the service we received!