I had my wedding reception at the Verdi Club this past May 2014. I was on a budget (well, who isn’t!), but food was going to be a priority for me. After all the hoopla around a ceremony and entrance into the reception site, who wants to sit down to a crappy meal?!? Well, Verdi Club has that in spades with Chef Sean! He is amazing! He was very flexible and helpful when working with us on our family-style menu, even going as far as to grant my special request for macaroons. The passed hors d’oeuvres, dinner, and dessert were all AMAZING!!! Everyone was saying that it was the best food that they had at a wedding and I wholeheartedly agree.

In addition, Denny Palmer (previous Manager) and Jason Mulvaney (current Manager) were a breeze to work with. Denny even was our bartender and sound tech for our wedding. I also used every single one of their rectangle tables to create a big square layout with only a few round tables on one side. It was the first time that they had done this sort of seating/table arrangement, but they were willing to give it a shot. The rest of the staff were all great to work with too. Everyone was very polite, cheery, and efficient. I didn’t use any wedding coordinators or day-of coordinators, so I was a little nervous. It’s a testament to the staff that everything went so smoothly (well, that, and with help from my brother and future-husband who brought everything to the Verdi Club and made sure everything on my checklist was done ☺).

The venue itself is a real treat with a lot of character, from the separate bar area to the ladies lounge upstairs. The whole venue is extremely reasonably priced, which gave me a little room to spend on lighting, making the place all that more beautiful. I highly recommend Verdi Club the next time you are looking to book a space for an event!! And, I would definitely use their in-house chef, Sean Gawel! 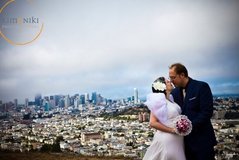 We had the Brazilian Room in Tilden Park booked for 6 months or more when I started feeling like our venue wasn't very "us." I started feeling like the decor needed to be pristine--like something out of Martha Stewart or something. And though it is very beautiful, once we saw the Verdi Club we knew that was it. Denny, the manager, is a very friendly, easy-going, down to earth guy. He is very flexible and generous about time and pricing etc., which was the exact opposite of the Brazilian Room. However, since we were organizing our wedding ourselves I did feel like we were asking him 5 billion questions every day. He answered them kindly over email and never seemed annoyed, which was very nice. I did wish that they had something to give us that would answer a lot of these questions right away. On the other hand, that's part of it's charm, rather than being a big wedding factory. The Verdi Club is an active, private Italian-American Social Club, though I think their membership is small. The hall was built in the 30s and still holds that historic sensation from the minute you walk in. There's a great full bar and lounge area with a couch & cocktail tables, etc. And the FABULOUS ladies lounge upstairs. The ballroom is gorgeous with wonderfully high ceilings, art deco sconces & hardwood floors. And a disco ball. There's a high stage for a band as well. The Verdi Club is not for everyone. It meant a lot to me for many reasons: I'd lived in the Mission for many, many years, and it seemed like a place my grandparents would have gotten married in (my grandmother was from Italy), and a lot of the halls that my grandfather played in during his big band days (they have a lot of swing dance parties here). As Denny said on our first walk-through, "It's not pristine like some other places, but it has an ambiance and everyone who comes here has a good time." That was exactly what I wanted and exactly what I got. We had a blast. The only problems I had, were on the day of, and actually didn't have anything to do with Denny since he was out of town that weekend. His replacement didn't seem to know exactly what was going on. The wrong tables were out and the linens that we got specifically for the wedding were not on the tables (I had wanted black tablecloths that hit the floor). Instead they had put the club's on, which did not fit. Also, we had planned on using an upstairs room for the wedding party to get ready in, relax beforehand, and so on. Unfortunately, it had not been cleaned from the night before and the floor was incredibly sticky, making it unusable. At one point, it got really hot in the hall & my husband had to go ask some people to open doors & turn on fans, which seems like the manager's job. Lastly, the stand-in manager, disappeared from 3:30-5:30, when doors were to open at 6pm & many of the set up people were showing up at 3:30pm. They had to fend for themselves, which I think is really crazy. Who does that? I know that if Denny were there NONE of that would have happened. In the bigger picture all of that stuff is small and didn't spoil the night whatsoever. All in all, we had an amazing time and we were very happy with everything! Oh! I didn't get a chance to eat much of the food, but EVERYONE said it was great and there was tons of it. Especially the mac 'n cheese. My mother-in-law mentions it constantly. We had been worried about the amount since we were doing all appetizers, but it was totally great.