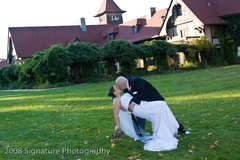 When we first met Steven we thought he was going to be the perfect officiant, he was personable and funny and we loved the fact that he had a backup JP in case of an emergency.

However, when it came to the rehearsal on the Friday before the wedding, he showed up without any of the vows information that Adrienne (the bride) had sent him, he wanted to run the rehearsal up on the porch instead of down at the actual ceremony site and overall it was just a mess. Then the day of the wedding, he ended up making Adrienne VERY upset by overwhelming her with unimportant questions right before the ceremony. Then during the ceremony instead of respecting our wishes to stay out of the way he shoved his binder in front of both of us for the exchanging of the vows. So EVERY picture now has him and his binder in it.

Maybe he was just having an off weekend, but he was one of the few vendors we were unhappy with.