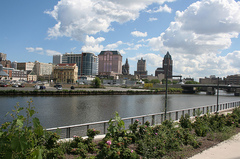 We rented two limousines during the day, they arrived on time and there were no problems.

They were horrible. Used them for a bacheloette party. A tip was demanded before we entered the limo. We weren't informed of this and it was about 25% of the total. The limo driver disappeared on us a few times. We were left standing outside calling over and over again to the driver. Then he started taking us to places we didn't ask to go. Over an hour of our time was wasted because of the driver. The phone in the back was an old piece of garbage that kept falling off. It smelled like puke in the limo. It was just a total waste of time and money. Never use again!!!! Giving one star because you have to give at least one to leave a review. Garbage!!!!!

It was 85 degrees on our wedding day and the air conditioning went out on the party bus, which I understand happens. The owner, Ken, was super apologetic and I believe honestly would have had another bus for us if he had one available, however, all his buses were out. Okay, no biggy. Then there was a our driver. Our driver started out out by being five minutes late - Not a big deal, but then he later denied it - Big deal, don't lie to me or your boss. Then he got lost every-single-place-we-went. E.V.E.R.Y.W.H.E.R.E. folks. He had a GPS, our itinerary which included addresses and two hours from the time he dropped the gals off the at the church to the time we headed off to the Arboretum for pictures (with hot air blowing on us). My father-in-law ripped him a new on and so you think he would have gotten his act together and got his directions down. After the ceremony me, my wife and our maid of honor asked, "Do you need directions to the Arboretum?" "No, no, no...I've got it." Guess who was giving him directions about five minutes later when we missed our turn? This guy. We are a nurse and a teacher who decided to splurge on getting a bus so our wedding party could all have a little special time together and not have to worry about who was driving who's car and how to get to the reception - It was and has been a disaster. It would have been better to take a Madison Metro bus. So then there was the phone call I made to the owner while on our honeymoon. He hung up on me. I called him back when we got back and he hung up on me again when he thought I was a telemarketer. When we finally were able to talk like grown-ups he informed me that the driver said, "I gave them an extra hour." We were late getting to the church, pictures and the reception, so why we wanted another hour on a bus without air conditioning, I'm not sure. Needless to say it's a big bunch of "he said, he said" with the owner in the middle and us out over $1,000 we could have used on new windows or a hundred other things. Case in point: It was the worst part of our day and the thorn in my hind end since the wedding day. They said they are willing to refund one hour only if they find the driver is lying, which requires us to drive over to Milwaukee, play more he said-he said and cross our fingers. I called him when I could spare four hours to drive to and from Milwaukee and have it out with these jokers and guess who couldn't be found? The driver. Haha, how ironic! I contacted the Better Business Bureau of Milwaukee, me and the owner went back and forth without any progress and they left it "Unresolved." I was asking for a one hour refund (approximately $250) for a totally ruined experience, he said he could give me a gift certificate...like a nurse and a teacher are going to be getting a limo again - Especially with them! So I'm out to make sure they loose 100% more than $250. Tell your friends Churchill Limo is a joke. I'm not saying the air/heat will go out or that the driver will be late or get lost, but what I am saying is that if something does go wrong they will NOT stand by their product or service. I would have given them a 0/5 stars but it wasn't an option.

Do not go! He will sell you on his customer service and "give you a great deal". Well it was 100 degrees on our limo and no air conditioning, the cd player skipped while driving, the driver DEMANDS his tip before taking off and I asked him to stop at a bar and while his gps system was on the dash board, I had to tell him directions! Church Hill Limo has a great selection of fleet, but just not worth it! Everytime I called, he didn't give me a chance to speak, claimed he remembered me and didn't. It did get us to the reception tho. When I called the limo service that day to find out about the air conditioning.