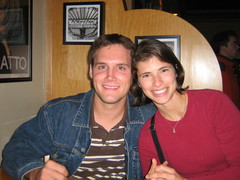 The first vendor we booked for our wedding was the band. We heard A Classic Case at the Yellow Fin Restaurant in Edgewater and called them hoping they would play at our wedding. They did and they were great! Our guests are still raving about them!

We wanted music that people would enjoy listening to whether they felt like dancing or not and we found the perfect band in A Classic Case. The band members were fun, the music they played was great – Beach Boys, Frankie Valley and the Four Seasons and the Blue Brothers Soundtrack – and we danced the night away. A Classic Case is not your usual wedding band without any of the usual “cheese” or corny-ness, just a great band that happens to be playing at your fantastic party.

It had rained the morning of the wedding and unfortunately water later fell on the band’s equipment, causing damage. They would have been well within their rights to pack everything up and take off. Instead, they repaired as much as they could, as quickly as they could and continued to play the rest of the evening.

My husband and I continually discuss how awesome the band was and how we feel like they were a major contributor in making our day as fun and memorable as it was. I highly recommend A Classic Case.