Mike, the owner of DJ Innovations, did a great job at our wedding. He kept the dance floor full all night long, with a great mix of music. There were a few things that he didn't do exactly as I had requested, which I why I didn't give him 5 stars. Overall, he did a wonderful job & all of our guests raved about the music.

For a classical guitar ceremony musician, he gets 5 stars. For reception DJ, I wish I could give him the same. He played the music we'd written on our must play list during dinner, so we didn't dance to it. He also played music that the younger crowd would like, but not the older crowd. Older family complained about the music, and I went up to Mike to ask him if he could play older music. "You know, things that my grandparents would like. Classic jazz, rat pack, that kind of music," I said. He said sure, and played one song. Then he continued to play the music that only the young people would like.

I would absolutely recommend him for a ceremony musician. But for a DJ? Your money is better spent elsewhere. 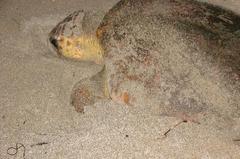 Fantastic emcee and wonderful on the guitar. Listens to what you want and revises selections to match your tastes and desires. Very reasonable price for unusually exceptional quality!