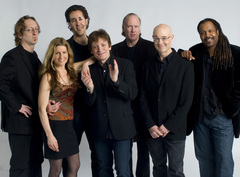 
Cracked Ice is a NYC-based musical group led by saxophonist/producer Crispin Cioe (Rolling Stones' Steel Wheels Tour, sax solo on James Brown's "Living in America", Music Director/PBS' "Mark Twain Prize", etc.) and featuring musicians/singers with similar credits in the recording/touring end of the music business. Our goal is to consistently bring to every party we play the same level of musical/performance excellence that we've all brought to concert stages and recording studios nationwide. . . . and to create the perfect musical underscore for every couple's unique reception. . . .nothing less, ever!