When the atmosphere pulsates with a vibrating and explosive sound, then La Internacional Sonora Show must be playing. Their catchy tunes have generated red-hot hits that have become chart-toppers over and over again, while the group’s electrifying live performances have left a lasting impression on audiences everywhere. They perform a wide variety of popular Latin music, including salsa, cumbia, and merengue, all with indigenous rhythms that creates an electrifying synergy with the audience. La Internacional Sonora Show is a favorite among all Latinos, and their popularity extends from coast to coast and around the world.

Please allow me to introduce to you the premiere Latin Tropical act known in it’s beginnings as Sonora Dinamita and changed it’s name to La Internacional Sonora Show in 1993. Our music is known worldwide, and played at virtually all events where Latin music is appreciated.

La Internacional Sonora Show (www.SonoraShow.com) is known and revered throughout the Hispanic community. We have sold millions, have over 60 “hit” songs (many still receive heavy radio play), and our videos are played on MTV ES.

La Internacional Sonora Show has recorded Cumbia, Banda, Salsa, Vallenato, and Reggaeton. By having such a huge repertoire, our music is loved by individuals of ANY ethnic background Latin (Mexican, Central and South American, etc.) and Anglo alike. We have over a dozen albums under our belt including an album recorded in 1993 called “Escandalo from that album was a top charting Billboard hit. When attempting to compare our appeal and demographic to the Anglo market “The Beach boys” come to mind. 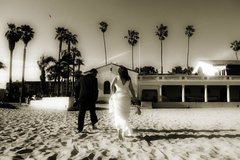 Kiko and Roxana Vargas did an amazing job in getting our guests dancing ALL night. If you grew up listening to Sonora Dinamita, this is the band for you. Our guests STILL talk about how much fun our wedding was because of this awesome band. Well worth it :)