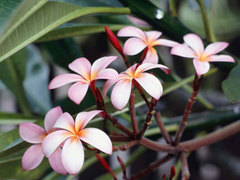 
SINCE 2003 WE HAVE BEEN TAKING CARE OF ALL THE ARRANGMENTS TO MAKE YOUR SPECIAL OCCASION EVERTHING YOU EXPECT AND MORE.

Our wedding was fantastic; exactly how we wanted it but with some details missing. Our biggest splurge was on the food; we expected what we were paying for and Marsha Reynolds seemed to have it in the bag. A week before the wedding Marsha notified me that she would have her business partner run my wedding while she managed another. She also mentioned that she would be there later on during the reception to make sure everything was going smoothly. No big deal right? That’s what I thought.
We contracted a minimum of people attending and paid for that minimum; 80 people. We were afraid that more than who had RSVP’d would show and we made Marsha aware of it. She comforted us with the knowledge that they were always well prepared and we would have more than enough food. We probably had around 50 people who actually attended. So that would automatically lead us to believe that there would be food to the max with everyone leaving stuffed and satisfied. That’s not what happened at all sadly.
In our contract we had a set menu, the menu was supposed to be as follows:
Appetizer Hour
A Fruit/Cheese/Vegetable Display with Spinich Dip & Cheese Slaw. During the signing of the contract Marsha also mentioned making the Display more anti-pesto; including olives. Example of how the set up should have been: http://www.facebook.com/?ref=logo#!/photo.php?fbid=155369872108&set=a.155364342108.123010.153944432108 Well, we got minimal quantities of Fruit, Cheese, Vegetables, Spinich Dip & CheeseSlaw; no anti-pesto.
Passed Mini Crab Cakes (these were nowhere to be seen and it was the main thing that I was looking for. Marsha said that they would have a plate of these and Kenny’s raviolis at our head table since these were our favorite).
Fried Cheese Raviolis (at the tasting we had little square, breaded delicious raviolis that were perfect finger food. What we got our day was greasy perogi type raviolis that had to be eaten on a plate; we received a plate of these at our head table).
The Groom & I were off doing our wedding photos while guests were supposed to be enjoying their selves on the terrace. We had many complaints from our guest, most including that there were no napkins or forks, not enough raviolis; had to share & there were mouse quantities of food on the “display”.
Reception
Carving Station with Bourbon Glazed Ham and Biscuits (no biscuits, just ham)
Chicken Alfredo over Penne Pasta with Fresh Toppings and assorted Italian Breads (We had Chicken Alfredo with Bowtie Pasta and one type of Roll)
Personal Pizzas for the kids (these were there and the kids weren’t made aware; the only pizza that was given out was to our son who personally asked for it).
Mixed Green Salad with assorted Dressings (the salad was pre-made with Italian Dressings; the vegetarians in attendance had no choice).
Sweet Corn with Red Pepper Medallions, Green Beans Carbona & Rosemary Garlic Roasted Potatoes. (These were exact but there was not enough)
The quantities of these were so limited that by the end of the first line the ham was almost completely gone and the potatoes were gone. Also, we had a lot of complaints that the food was cold.

Other than the problems listed they did a great job; the service was wonderful and Andrew was great with making sure we were taken care of. Marsha never showed up and when they came the next day to pick up their supplies while we were cleaning up they were in and out; Marsha avoiding me by never asking if we were satisfied or not. I did not make her aware of the problems as of yet since I was involved in other duties. The day after, I decided to send Marsha a message notifying her of my concerns in a professional manner:
Thanks for everything Marsha; I have to say the service and the promptness was great! The food was very good as well. We do have a few problems thou and I just wanted to get a better understanding of what happened. Firstly there were no crab cakes during app hour; this was really the only thing that I was looking forward too and I remember you saying that there would be a plate of those and the ravioli's at the head table for us. When Kenny asked Andrew what had happened to those he had informed Kenny that they were dropped? Also the ravioli was not what we had tasted; they were without breading and very oily. I had some guests complain that they were hard to eat as finger food and there was not enough. Some guest didn’t get any at all and there actually was about 50-60 guests who actually showed up and about 15 of those were off doing pictures with us! Also, the FCV display was sparse and did not include the anti-pesto items that you had suggested. Then we noticed there were some foods items dropped that were in the contract: biscuits for the ham, assorted Italian breads with the alfredo (there was one type of roll for this and the ham; instead of penne pasta it was bowtie), assorted dressings for salad (it was only Italian). They ran out of potatoes towards the end of the line and we noticed that only one pizza was handed out because my son had personally asked for it; I don’t think the other kids were told about the pizzas. Other than all that again, the service was great; Andrew even announced us and made sure they were there to help with anything! The real problem seemed to be lack of food. We had a lot less guests actually show up then the 80 we gave as a minimum and paid for so I expected a whole lot more food. We just don’t feel like we got our money’s worth. I hate to be that way because I was so excited to have you guys; you were on top of everything! Hope to hear from soon! Thank you.
She responded by not replying & deleting us from her friends list on facebook. I then sent this message:
Have we figured this out? I'd really hate to put out a testimonial right now in this situation. I really thought we would be totally satisfied with you guys; we were so excited. Please get back to me soon. I'd also like to know what I did for you to take me off your friend's list?
I then still received no response and she deleted my son off of her friend’s list then took me off her company’s fan base. That automatically tells us that all the professionalism has gone out the window and they know that good business was not in place. Unless this happened because we were singled out then I do not suggest hiring Catered with Style.
Update: To be fair I sent this review to Marsha first so I could give her a chance to repent. She then proceeded to block me so my only other option is to make others aware so they don’t have the same lousy experience that we have.