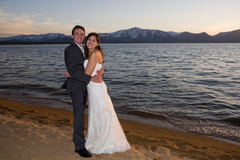 There are so many dj's out there - how do you know who will be the right fit for you?
I live in San Francisco and don't have the time to get to Tahoe in the next month or so to meet with any of them - does anyone have any recommendations?
Thanks!

The Reno Tahoe DJ Company - http://www.renodj.com The owners name is Larry Williams. His website is fabulous. He really puts the personal touch on everything. With his new standard wedding package we'll be able to use his services. We have a really small venue, but wanted a more professional touch. He's also in touch with all the coordinators too. Good Luck.

Bill Burns with Music Magic was amazing. I only met him in person the day of the rehearsal and he did everything we asked and more. I didn't have a wedding planner and he helped with the rehearsal and getting everyone going. It was a real life saver, everyone loved him. His website is: www.musicmagictahoe.com
# 530-577-2221.
I would reccomend him to anyone.

Bill Burns is actually on my list! Thanks for replying :)

Was Bill good at getting everyone to dance? that is really important to me...

Yes he was. We had a morning wedding so I was worried about people not getting up and dancing, but we had a packed dance floor:) We pretty much told him two songs we wanted to hear and let him take over and it was great.

Thanks for your help! I will call him tonight :)

I used JJ Entertainment. Our dance floor was packed the entire night. They did the music/sound for our outdoor wedding ceremony, outdoor cocktail hour, and indoor dinner/reception. They (Suzanne and Gary) were incredibly accomodating (we moved our toasts outside at the last second). I never met them in person until the day of the wedding. We spoke on the phone several times and I filled out a very long sheet of "songs to play" and "songs to definitely not play". They did a great job and I highly recommend them.

It seems like JJ Entertainment and Bill Burns are the most highly recommended in Tahoe - I need to make a decision soon!

Thanks for your input!

I would suggest either of the 2 following DJ's...end of story:

They both have incredible reputations in town as talented and fun. They're on most/all of the local recommended vendor lists. I know both personally and they're personable & fun. Ryan (Lake Tahoe DJ) is DJing our wedding, and Derek was also on our the list but was already booked.

We used Randy Hartwick, and unfortunately I can't recommend him. Our wedding was used as a trial for his 2 kids to practice DJ'ing a wedding, music had gaps, volume went up and down, our intro was messed up (wrong song played, stopped half way through, started right song, announced names wrong, etc), cake cutting was announced as, "Now it's time to eat the cupcakes." sigh. We knew they were going to be there, we were not aware our entire reception was going to be turned over to them. They were using new equipment that they weren't comfortable with too. Overall, we wish we had just used an ipod, or spoke to more DJ's. When contacted about our concerns (which were also concerns of everyone who attended as well as our planner) his reply was to deny anything went wrong, that we loved our reception, and he did nothing wrong. Too bad the guests, the video, and the bride and groom say differently. :(